Democratic politics depend on citizen participation, trust and support. While this support in democratic institutions and political elites is declining, public and scholarly discourse frequently suggests counteracting the challenge by strengthening the role of experts in political decision-making, yet such reform proposals convey a paternalistic threat that contravenes fundamental democratic principles.

Proposing an alternative, 'radical proceduralist' understanding of democratic legitimacy and institutional reform, Radical Proceduralism argues that there is no such thing as 'political truth' or 'correctness' that could justify experts wielding political power. Rather, the only criterion for democratic legitimacy is the fair and equal inclusion of all affected citizens.

Radical Proceduralism bridges the gap between political philosophy and practical institutional experimentation asking us to bring citizens back in and to engage them in a dialogue about 'the rules of the democratic game' and proposing institutional devices that figure as 'conversation starters' and facilitate such dialogues.

1. Bridging the Gap between Principles and Institutions: Meta-theoretical and Methodological Considerations

2. Procedure, Substance, Democratic Legitimacy: A Framework for the Debate

4. Normative Proceduralism and Its Limitations in “Post-metaphysical” Political Theory

7. Conclusion: Democratic Institutions for Radical Proceduralists and Other Citizens

Dannica Fleuß is a Research Fellow at Helmut-Schmidt-University Hamburg and a Research Associate at the Center for Deliberative Democracy and Global Governance.

Posted by Thomas Gregersen at 12:04 No comments:

Posted by Thomas Gregersen at 12:50 No comments:

Fabienne Peter (Warwick) will give the 2021 Wittgenstein Lectures (University of Bayreuth) via Zoom on June 28 - July 2:

The Grounds of Political Legitimacy

Lecture 3: The Value of Political Deliberation

Lecture 5: Is Political Deference Ever Warranted?

Fabienne Peter is the author of "Democratic Legitimacy" (Routledge, 2008).

Posted by Thomas Gregersen at 20:02 No comments: 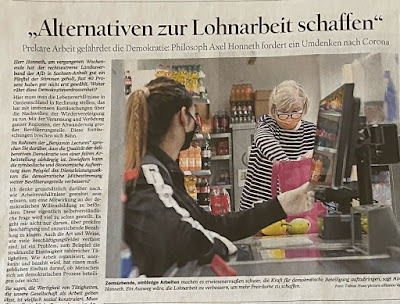 Posted by Thomas Gregersen at 12:12 No comments: