Maureen Junker-Kenny on Habermas's book on the history of philosophy 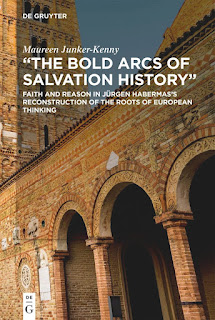 "The Bold Arcs of Salvation History"

This book offers the first in-depth treatment in English language of Habermas’s long-awaited work on religion, Auch eine Geschichte der Philosophie, published in 2019. Charting the contingent origins and turning points of occidental thinking through to the current "postmetaphysical" stage, the two volumes provide striking insights into the intellectual streams and conflicts in which core components of modern self-understanding have been forged. The encounter of Greek metaphysics with biblical monotheism has led to a theology of history as salvation, expanding in bold arcs from Adam’s Fall to Christ and the Last Judgement. The reconstruction of key turns in the relationship between faith and knowledge ends, however, with locating the uniqueness of religion in "ritual" and defining reason as inherently secular.

The book exposes the sources and trajectories, analysed by Habermas with great erudition, to different assessments in biblical studies, theology, and philosophy of subjectivity. Apart from Paul and Augustine, key lines of continuity are identified in the Gospels, early patristic theology, Duns Scotus and Schleiermacher that retain the internal connection of faith to autonomous freedom.

1. Recent Philosophical Debates on the Hermeneutics of Past Events and Their Relevance for Biblical Research

2. Reconstructing the Position of Paul in Early Christianity

3. Tracing the Origins of the Doctrine of Christ

5. The Patristic Era as Setting the Course for Relating Religion to Reason

6. The Origins of Modernity in the Late Middle Ages

7. “Faith” and “Knowledge” after the Copernican Turn in Kant’s Critiques of Reason

8. Post-Kantian Theories of Language – Pacemakers for the Paradigm Change from Subject Philosophy to Linguistic Interaction

9. Reappraising the Counterparts: Secular Reason as the Default Position, Religion as “Other”?

Maureen Junker-Kenny is Professor at the School of Religion, Trinity College, Dublin. She is the author of "Habermas and Theology" (2011) and "Religion and Public Reason: A Comparison of the Positions of John Rawls, Jürgen Habermas and Paul Ricoeur" (2014).

Posted by Thomas Gregersen at 11:12 No comments:

Workshop on Habermas' "Between Facts and Norms"

The 30th biennial World Congress of the International Association for the Philosophy of Law and Social Philosophy (IVR2022) will take place in Bucharest, Romania, from July 3-8, 2022. A special workshop will be organized on Jürgen Habermas' "Between Facts and Norms. Contributions to Discourse Theory of Law and Democracy. " (1992):

The workshop will revisit the arguments put forward in Jürgen Habermas' book. "In particular, considering phenomena that have impacted modern law, such as legal globalization, transnational dialogue of theoretical traditions, and the discursive developments in legal theory and philosophy of law since 1992."

All interested applicants are invited to send abstracts before May 31, 2022. More information here.

Posted by Thomas Gregersen at 20:05 No comments: