Tocqueville Review: Rawls's "A Theory of Justice" at Fifty

The latest issue of "The Tocqueville Review" (vol. 43, no. 1) features articles on John Rawls's "A Theory of Justice":

* James T. Kloppenberg - "John Rawls and "Our Tradition" of Democracy"

The notion of a clear distinction between Rawls's liberalism and social democracy rests on a caricatured conception of the liberal tradition and Rawls's place in it. From Rousseau, John Adams, and Madison through Tocqueville to Dewey, notable political theorists have sought to balance the two principles at the core of Rawls's A Theory of Justice. In this essay I sketch the ways in which American thinkers and activists escaped the cages in which commentators have tried to confine them, not only the false binary between liberalism and democratic socialism but also that between secularism and religious belief. As Rawls himself tried to make clear in his later writing, his ideal of justice drew from earlier theorists who understood the constitutive role of social interaction and inherited traditions, and he envisioned a society with room for people animated by comprehensive philosophical and religious ideas not shared by everyone else. Rawls's political liberalism, historicist as well as pluralist, was attuned as much to the threat inequality poses to freedom as to the endangered status of freedom in mass society. Rawls's ideas, especially as articulated in his book Justice as Fairness, remain a vital resource for social democrats who prize social and economic equality as well as individual liberty.

* David A. Reidy - "Rawls and Racial Justice in The United States"

Abstract: It has become increasingly common for students and scholars to criticize Rawls's work as irrelevant, or worse, when it comes to issues of race and justice. Though he clearly judges both structural and systemic racial hierarchy and interpersonal racial disrespect to be non-controversially unjust, Rawls does not much explore, either in his ideal theory or in his non-ideal theory, issues at the intersection of race and justice. In this essay, drawing from both his texts and biography, I highlight some of Rawls's thoughts on, and the seriousness with which he approached, these matters. Though I do not attempt to answer all the criticisms that have been raised regarding Rawls's approach to issues of race and justice, I answer a few and to point the way toward resources that might prove fruitful in answering others. With respect to issues of race and justice, there are good reasons, better than critics typically acknowledge, to continue exploring the extent to which working from within a Rawlsian framework we can successfully think through our aspirational ideals and eliminate existing injustices.

* Thomas Ferretti - "Justice Between Individuals: John Rawls and the Demands of Political Liberalism"

Abstract: John Rawls proposed "A Theory of Justice" (1971) aiming at building consensus in democratic societies. In the middle of the Cold War, the Vietnam War, and the Civil Rights movement, while Americans were strongly divided, Rawls' political liberalism offered a method to build political agreement between people with different and conflicting values and interests, to preserve peace and other benefits of stable social cooperation. Fifty years on, while authors like Katrina Forrester (2019 a, b) suggest moving on from the ideal of political consensus, other voices such as Catherine Audard (2019) remind us of the relevance of public reason in a world full of divisions. This paper builds a dialogue between these two influential authors to assess the legacy and relevance of Rawls' political philosophy today.

Posted by Thomas Gregersen at 20:55 No comments:

Posted by Thomas Gregersen at 07:32 No comments:

The "Afterword" has the following sections:

In the new edition, Habermas has also corrected a number of factual and linguistic errors, but not all. The corrections are not highlighted. It has the advantage that the page numbers are the same as in the first edition. 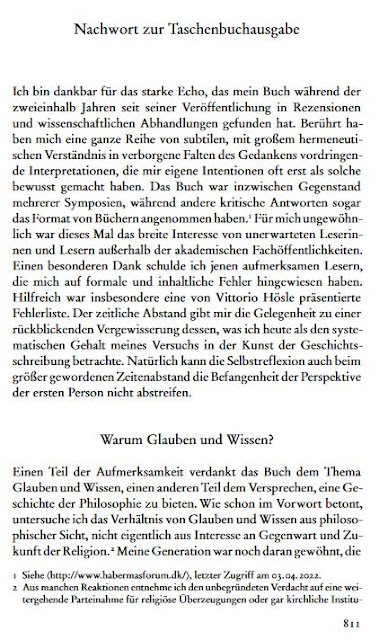 Posted by Thomas Gregersen at 20:49 No comments: